A cofactor is a chemical substance, which binds to a protein, and which is necessary for the biological activity of the latter. These proteins are often enzymes, and the cofactors can be thought of as "helper molecules" aiding in biochemical transformations. Thrombomodulin (TM) is the cell surface receptor for thrombin. When TM is bound to thrombin, the procoagulant activity of thrombin is blocked. This complex activates protein C on the surface of the endothelial cell. In the presence of its cofactor, protein S, it acts as a powerful anticoagulant by inactivating the active forms of FV, FVIII, thus interrupting the formation of new thrombin molecules. Binding of TM to chondroitin sulfate, thrombin linked to TM can no longer activate its substrates (fibrinogen, FV) nor induce platelet aggregation. Platelets, monocytes and neutrophils contain small amounts of TM compared to cultured endothelial cells. Detailed analysis of thrombomodulin circulating in human plasma revealed smaller fragments or degraded forms which are considered to have only limited function. Plasma levels of TM were used as a marker for endothelial cell damage in vivo.

Thrombomodulin truncated at the C-terminus, missing the putative transmembrane and cytoplasmic domains, approximately 38 amino acids. To be taken up with 100µL of distilled water to generate a solution of 100µg/mL. After reconstitution, aliquot and store the protein at -70°C.

The lyophilized presentation allows greater stability until the expiration date. 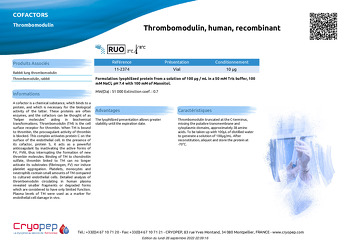