A cofactor is a chemical substance, which binds to a protein, and which is necessary for the biological activity of the latter. These proteins are often enzymes, and cofactors can be thought of as "helper molecules" aiding in biochemical transformations. Fibronectin is a glycoprotein that exists in soluble form in plasma or in fibrillar form in the extracellular matrix. This protein modulates the interactions between cells and the extracellular matrix. In the absence of fibrinogen, fibronectin controls cogulation. Fibronectin can bind to fibrin to strengthen clots and make them more stable. Fibronectin has shown roles in platelet function, fibrinolysis, chemotaxis, phagocytosis, and opsonization. In certain pathologies such as trauma, sepsis, liver disorders, the fibronectin level may be low. Conversely, some cancers can have high fibronectin levels.

All cofactors are accompanied by certificates of analysis which describe the appropriate storage conditions. Never allow solutions to remain at room temperature for excessive periods of time.

The vast majority of coFactors is pure (without additives) with > 95 % purity SDS-PAGE.
Expiration date of one year from delivery.
Delivery in large quantities.
Discount according to quantities. 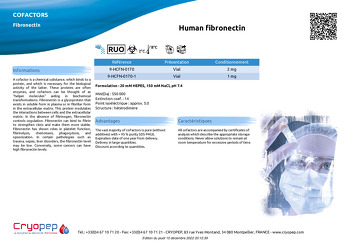