Diluted prothrombin time for the determination of the lupus anticoagulant (LA)

The ACTICLOT® dPT ™ kit is used for the identification of Lupus Anticoagulant in human plasma.
The test can be performed on all automatic or semi-automatic coagulation devices.

LA are heterogeneous autoantibodies of IgG and IgM type directly directed against a variety of anionic phospholipids such as cardiolipin, phosphatidylserine or phosphatidylinositol or against proteins having the capacity to bind to phospholipids such as β2-glycoprotein I (β2-GPI ).
LA are characterized by their ability to prolong clotting time in in vitro tests such as lupus-specific TCA, Kaolin partial thromboplastin time, dRVVT, and diluted prothrombin time (dPT).

- Screening and confirmation tests can be performed at the same time or separately.
- Adaptable to analyzers. 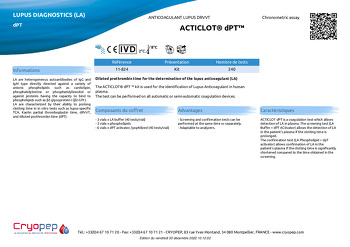