Fibronectin is a glycoprotein that exists in soluble form in plasma or in fibrillar form in the extracellular matrix. This protein modulates the interactions between cells and the extracellular matrix. In the absence of fibrinogen, fibronectin controls coagulation. Fibronectin can bind to fibrin to strengthen clots and make them more stable. Fibronectin has shown roles in platelet function, fibrinolysis, chemotaxis, phagocytosis, and opsonization. In certain pathologies such as trauma, sepsis, liver disorders, the fibronectin level may be low. Conversely, some cancers can have high fibronectin levels.

All proteins are accompanied by certificates of analysis which describe the appropriate storage conditions. In order for us to guarantee the stability of the product, it is imperative that the storage conditions are observed. Brief centrifugation of the zymogens in their original packaging will fully recover the sample at the bottom of the tube. Never allow protein solutions to stay at room temperature for excessive periods of time. High temperatures can increase the rate of protein degradation. Avoid storing or maintaining diluted protein samples for an extended period of time. In general, purified proteins are inherently more stable in concentrated form. Many proteins are "clingy" by nature. To avoid protein loss due to adsorption, extremely diluted protein samples should be prepared in buffers containing excipients such as bovine serum albumin, polyethylene glycol, Prionex or gelatin. 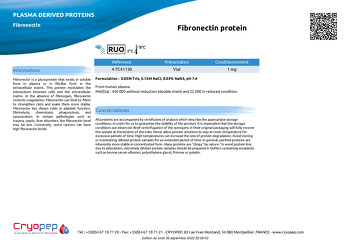